Located on a 300,000 square metre plot, Ute Tilo Madrid Abroñigal is the primary logistics centre in Spain handling up to 18 trains with a maximum length of 700 metres every day in loading and unloading operations. The facility has 15 tracks for the loading and unloading of trains and a 15,000 square metre heavy parking area for trucks and semi-trailers.

Ute Tilo Madrid Abroñigal is a joint venture between Renfe Mercancias and Grupo Transfesa created for the management of services in the logistics centre, with storage capacity of more than 3100 TEU and an annual throughput of 100,000 UTI. Intermodal transport unit handling services include loading and unloading in addition to a number of ancillary services.

Alberto Diaz is head of Ute Tilo Madrid Abroñigal Terminal. He says the Eco Reachstacker has a number of favourable features for the terminal, including reduced noise levels (7db quieter than the previous model) and improved fuel economy.

“We are particularly satisfied with its performance in terms of fuel consumption, with the new machine consuming 5-7 litres less fuel per hour than the DRF (which equates to a 45% reduction in fuel consumption),” says Diaz. 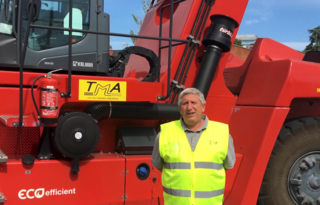 While this eco-efficient solution reduces fuel consumption considerably, its environmental appeal goes beyond lower emissions. Many customers refer to the quiet operation of the machine, particularly those operating in locations close to residential areas where noise limits are strictly enforced.

Quieter operation enables customers to use reachstackers in areas where they might not previously have been able to and also positively impacts the driver's experience. In addition, the drivetrain is much smoother, which reduces vibration and thus minimises driver fatigue.

Your driving makes the difference

According to Cuberos, another key feature of the Eco Reachstacker is its ergonomics. “It has smooth movements in handling operation and excellent driveability,” he says. “It is also very reliable.” 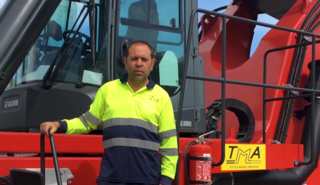 The growing use of Eco Reachstackers is evidence of increasing customer interest in machines that are not only cheaper to run and more environmentally friendly, but also improve the driver experience while enhancing productivity.

Themes in this article

The first-generation electric terminal tractor was introduced in the Americas in 2018. What are the key experiences from this first generation – and what are the next steps in Kalmar’s journey towards fully electric offering?

How to become greener with your reachstacker operations?

With Covid-19 induced downtime in cargo handling operations, now is the perfect time to optimize your emissions and energy efficiency. Peter Olsson and Mette Kjems Bærentzen from Kalmar show how to transform your reachstacker operations towards an eco-efficient future: step by step, from optimizing existing equipment and operations to which new equipment to invest in. The ultimate goal: Zero-emission equipment.

Our webinar in May gave participants a host of practical tips on making the most of electrically powered shuttle-carrier technology, including how to figure out the optimal locations for charging stations using advanced terminal simulation tools. We’ve summarised the highlights for you in this article.

Thank you for the order.
An error happened during registration.
Unknown error